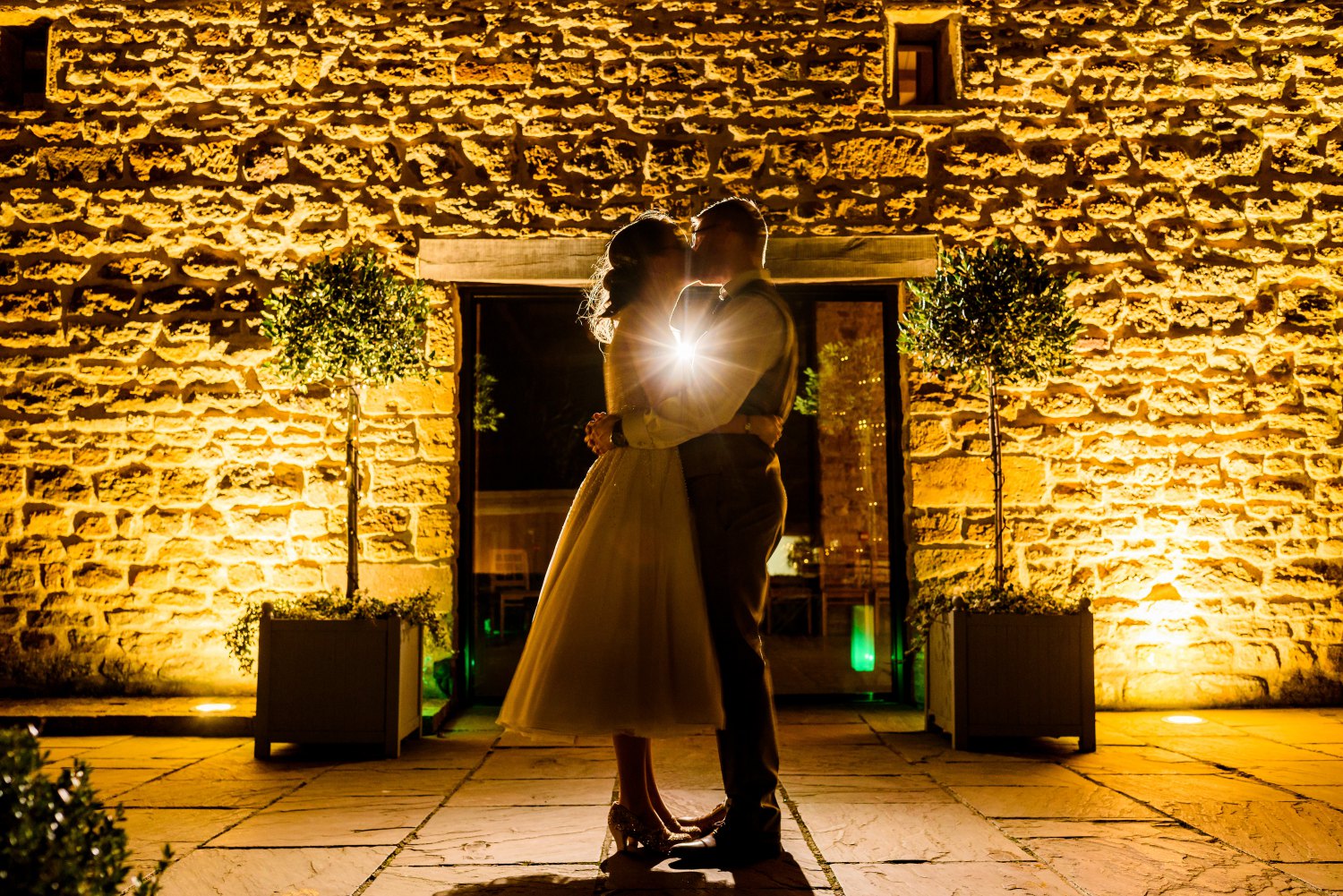 Your Names: Chris and Ali Brand-Barker
Date of Wedding: 9 February 2019
Style or Theme: Simple and natural (and snowdrops!)

One of Chris’s best mates, held his 30th birthday gathering at Nottingham ice rink, with a skate and an ice hockey match planned. Ali had been skating for a while with his wife, so she was invited along to celebrate too.

We met on the edge of the ice and skated many times around the ice, chatting and getting to know each other. I was pretty impressed as Chris had never skated before, so I sneakily made sure I sat next to Chris during the game. I got really excited about the game, and apparently Chris thought this was very sweet, so at the end of the night, he asked me for my number, which I was very pleased about!

The next day we met up in Newark, and had a lovely walk around the town. Chris even drank coffee – I didn’t know this at the time but he absolutely hates it! Our second date lasted four days. The rest is our lovely history!

For our ‘two years since we met’ anniversary weekend, Chris had been very keen that we went away, which I thought was awesome, if a little unusual. We decided on having a night away in the Cotswolds. The weather hadn’t been particularly good, but stayed dry for most of the weekend (an important detail for further on in the story!).

We found a map for a walk we wanted to do, and set off, squelching through the mud and puddles, but very happy to be out in the countryside. We came across a large and beautiful house, set in parkland and followed the footpath to a small garden with ponds and lots of snowdrops. Chris said he wanted to explore it, but I had seen the ‘Private’ signs and didn’t want to trespass, so I made us walked around the corner, until Chris stopped and hung back. I thought he was just desperate to sneak into the garden, so was a little confused!

Chris started talking… ‘You know how we make an awesome team?’ he asked. I agreed. Then sinking onto one knee into the mud, he continued, ‘I was wondering if you’d like to make it official? Ali, will you marry me?’ We don’t quite remember what happened next, but I remember joining Chris on his knees and squealing and kissing him lots and maybe crying a little bit (ok, a lot!).

We continued the walk, returning to the pub we were staying in, ate a lovely dinner and then drank lots of champagne!

I had a couple of visits to dress shops about 9 months before our wedding with a couple of close friends and my mum. I pretty much knew what I wanted to wear, but still tried on lots of different styles just to be sure! I was hoping that I could find a tea length or ballerina length dress with a bit of structure to it that I would be comfortable having a dance in later in the day. I also guessed that the weather wouldn’t be great in February, so didn’t want it trailing around in the mud! I really liked one dress, but there was something nagging me that it wasn’t quite right, so didn’t buy it then.

I finally found THE ONE in Wed2B when I was there just with Mum – it was a one-off dress, on a rail round the back, but when I put it on it fit perfectly and just felt right. I hope this isn’t cheating, but my something old, something borrowed and something blue was a tiny pale blue ribbon from my mum’s late Mum, which was pinned to my underskirt and my something new was a pair of silver and gold snowdrop earrings my parents gave me.

Our first dance was to ‘Come What May’ by Jarrod Dickenson. We felt it summed up how excited we were but that we were aware that being married isn’t always easy but that we would make it through, come what may.

What was your inspiration/theme for the big day?

Chris and I are both very outdoorsy, so wanted our decoration to reflect that. Snowdrops were a lovely backdrop to the proposal, so they had to appear as we got married pretty much a year to the day since we got engaged! Combining that, we went for very simple, natural colours of dark green, white and hessian.

Why did you choose Dodford Manor?

Dodford Manor Barn Wedding Venue is of course just gorgeous and a very pretty collection of buildings in a lovely East Midlands setting. I’m a bit of a heritage geek, the age of the place really appealed to me too! We loved that we could get married and have the reception all in one place, but the most important factor was how warmly we were welcomed by the team of staff and how flexible everything was at this wedding venue.

Wedding ideas and your wedding day:

Our barn wedding ceremony began with Edwina Hayes’ ‘Feels Like Home’ playing, and my Dad walked me down the aisle. We chose to have quite traditional vows, but made the readings quite modern. Two of our friends did the readings, ‘The Lovely Dinosaur’ by Edward Monkton and ‘All I know About Love’ by Neil Gaiman. While we signed the register we had ‘Promise’ by Thomas Bergesen and ‘Rockebel’s Canon’ by the Piano Guys. To see us out, we had the super happy ‘Sloe Gin Set’ by Bellowhead.

The flowers of course included snowdrops, along with white irises, wax flowers and herbs. The Bridesmaids had slightly smaller versions of mine, and the Flower Girl’s was similar. Our wedding table centrepieces were circles of Welsh slate (Chris has Welsh connections in the family), with little pots of snowdrops (thanks to my parents who grew them for us!), tealights in lanterns and moss on up-ended lengths of natural wood (thanks to Chris’s dad!). Also on the table were bottles of beer that my brother had brewed especially for us (with gorgeous labels). My cousin made miles and miles of bunting in dark green, white and hessian, which has since been re-used at our photographer’s wedding! Our cake carried on the nature and snowdrop theme, with a bottom tier made to look like a log (chocolate flavour), and the top two tiers white and covered in snowdrops (lemon flavour).

Your wedding feast – what’s on the menu?

We chose the Persian Terrine (starter), Pork three ways with Red Cabbage and Fondant Potatoes (main) and then the Trio of Mini Desserts.

Jenkinsons’ Caterers were absolutely brilliant and we had so many compliments on the food!

Your favourite moment of the day?

”The memory that particularly sticks in my mind is looking up at him just before we started saying our vows and not really believing that we were about to get married! My dad's speech was also brilliant - it's gone down in history as a beautiful mix of the very emotional and very funny!

”Dancing in the ceilidh with all our closest friends and family and the pure joy of it.

A word of advice for future couples?

Do your best not to panic, people will help the day along as everyone wants it to go well. Remember to have fun during the planning too. As many times as you can on the day, just look around at all the people there to wish you well and take a moment to pause and take it in.

Can you sum up your day in just 3 words?